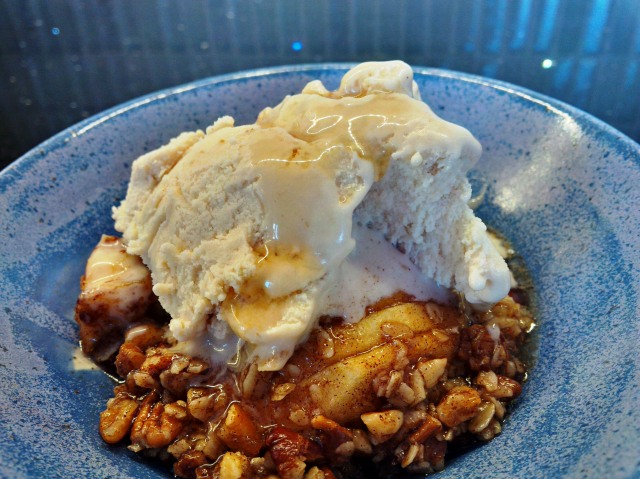 A couple years ago, everyone was making hasselback potatoes. Now it’s hasselback apples. This is my vegan version.

So what’s a hasselback? It refers to slicing a potato, or in this case apple, in thin slices almost all the way through but not quite. The final effect reminds me of a little hedgehog or armadillo.

is a hasselback potato – you can see how it’s sliced, ready to impress.

We’re going to do the same thing to an apple, then drizzle it with a delicious sauce that turns into caramel as it bakes. Oh yeah.

Hasselback apples look fancy schmancy but they’re really just an apple cobbler all dressed up for a party.

I’m giving you the proportions for one apple and you can easily scale up the recipe from there.

1 apple – I used a yellow delicious.

Peel the apple and cut it in half. Carefully remove the core; if you have a melon baller, that’s an ideal tool to use. You want the apple half to remain intact. Place the apple half cut side down and slice ¼ inch wide slices into the apple almost all the way through but not quite. You should be able to fan the slices open, but not have the apple fall apart.* Repeat with the second apple half.

Grease a small oven-safe dish and place the hasselbacked apple halves into the dish.

Cover and bake the halves for 10 minutes.

In the meantime, mix the remaining ingredients together to create a streusel crumble mixture. After the apples have baked for 10 minutes, spoon this mixture evenly onto the apples. You can try to get the mixture down between the slices, but it’s not necessary.

Bake for another 10 minutes uncovered.

Serve each hasselback apple with the now carmelized brown sugar-cinnamon sauce spooned over top. Seriously – all that stuff that’s in the bottom of the baking dish, scoop it up and put it back on the apple and eat it.

Serve the apples with vegan ice cream – I’m a huge fan of So Delicious (cashew-based) brand – and a drizzle of maple syrup.

*Oh oh! I sliced too far. My apple fell apart. Now what? Not to worry. Just break the apple up into chunks and bake it in a ramekin. It will be a mini-cobbler instead of a hasselback and just as delicious either way!

4 thoughts on “Hasselback apples – apple, caramel and a nutty crunch.”