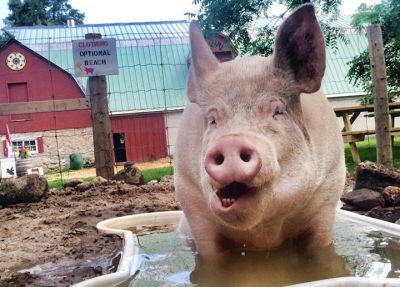 Anyone who knows me knows that I have fallen in love with Esther the Wonder Pig. This social media superstar is a real pig – who, just three years ago, as a tiny piglet, somehow escaped the horrific factory farm system and made her way to Steve and Derek, two men with hearts as wide open and big as the sky.

Steve and Derek quickly realized a couple things:
1) Esther was no family-pet-style mini-pig. She was a commercial pig, bred to grow quickly and become food.
2) Esther was not food. She was family, part of the brood of pets in Steven and Derek’s Toronto home.

Because she was not food, Steven and Derek questioned what else they had considered to be food.
They knew the dark side of the world’s industrialized factory farming, but had never really delved into it. Now they did. Within weeks of Esther joining their clan, Steve and Derek became vegan. Esther and all animal-based foods were literally no longer on the table.

And then Steven and Derek, affectionately called the Dads, did all manner of brave and outrageous things.

Esther became the “spokes pig” for their message of veganism and kindness to all creatures on earth. The Dads began to share photos of their giant house pig (Esther is now 700 pounds) along with witty, heartwarming and engaging comments on social media. Esther now has an ardent global following of almost half a million people and has inspired many people – me included – to adopt a vegan diet.

Keeping Esther in her Toronto home was a municipal violation. So the Dads decided to open an animal sanctuary called Happily Ever Esther. They crowdfunded the purchase of a farm and raised far more than the $400,000 they were asking for – all from strangers.

Esther and her dads have been in the news and on the news all over the world. Celebrities have come to visit her. People flock to see her, make donations and passionately share her story.

I’ve wondered often what has made Esther the Wonder Pig such an incredibly popular phenomena. After all, there are loads of cute animals on social media. There’s a ton of funny stuff too, and vegan recipes and calls to action against animal cruelty abound on the internet. So what is the magic of Esther and her Dads?

I believe it’s the permission they give us. The permission we rarely are given (or take!) to be ourselves.
To love openly.
To be vulnerable.
To ask for help.
To be kind and generous.
To care desperately.
To be authentic.
To be different.
To be brave.
To dream.
To challenge the status quo.
To embrace and welcome others.

It’s a marvelous gift. And when you receive it and open it up, you automatically pass it on to others.

So wave your freak flags, love and shine on!