Every year on my birthday my mother would announce “I remember the day you were born….” and she would launch into what I came to think of as my birthday story. It was a story just for the two of us to share. She’d recall the weather (it was snowing), having contractions as she served my brother and sister breakfast before sending them to school and telling my father not to dawdle coming home from work because “the baby was coming.” I’d hear how he was indeed late, how she wanted to stop to buy magazines on the way to the hospital but didn’t have time to read them because I was so impatient to be born. 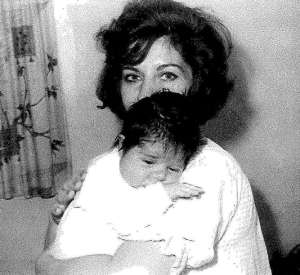 On my last birthday before my mother died, I went to visit her. She was very ill and her mental facilities were spotty. I told her it was my birthday, but she had forgotten. I asked her to tell me my birthday story. Frustrated with her own lack of comprehension she asked me crossly “what are you talking about?” Even when I prompted her, she just shook her head, not recalling what my birthday story was. Returning home, I realized bleakly that I would never hear my birthday story again. A part of me felt diminished.

On my first birthday after my mother’s death, my sister, Carla, who is seven years older than I am, took me out for the day. As we were driving, and completely out of the blue, she said “I remember the day you were born. The weather was just like this….” And then she told me about waiting with our brother and father for the call from the hospital, and how happy she was when she found out mom had had a baby girl.

I listened in stunned, joyous disbelief. My birthday story wasn’t gone! This was my birthday story from another perspective – a version that had never been told before. And with its telling that little part of me that I thought was diminished forever was restored.

Thank you for the birthday story, Carla. Happy birthday to me!

16 thoughts on “My birthday story”